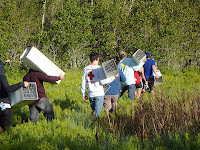 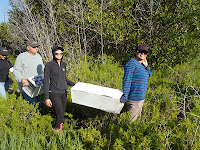 Everglades National Park needed volunteers to carry out and assist with setting up Marsh Rabbit traps one half mile north of the Coastal Prairie trail in the Flamingo District on Friday, April 26th and Friday, May 3, 2013. The volunteers were helping in an effort to retrap a rabbit whose radio-collar was malfunctioning. While not extremely heavy, the seven (7) traps were awkward to carry over uneven, wet and muddy terrain, through buttonwood tree snags and knee high brush the rabbits love to call home. The volunteers help allowed the researchers to attempt to recapture the rabbit and continue to collect valuable data from this individual.

On Friday, April 26th, volunteers placed the traps and baited them with apples and apple cider. Afterwards, they assisted with tracking a rabbit known as the Exboyfriend to learn about tracking methods and equipment. They also collected data on the Exboyfriend, the placement of the traps, and the conditions of the area.
﻿ ﻿

On Friday, May 3, volunteers checked the traps and removed them from the field. Even though they did not recapture the rabbit, they did capture a marsh rat and volunteers assisted with tracking a rabbit known as Lola, in which they had to get a visual. In the process, volunteers saw two box turtles, several bird species, and explored an area of the park not accessible by the traditional boardwalks.

Although unsuccessful for the researchers, it was a rewarding experience for the volunteers!
Posted by Unknown at 4:41 PM 1 comment:

To recognize National Park Service Volunteers-in-Parks Day, Everglades National Park hosted a volunteer event at the park’s historic Nike Missile Site on Saturday, April 27, 2013.  It is one of the Nation’s best preserved sites from the Cold War Era and was built in response to the Cuban Missile Crisis. Due to the rapid growth of vegetation in this tropical environment, regular maintenance is required to prevent damage to the infrastructure of the site.
﻿﻿﻿ ﻿ ﻿
﻿Volunteers removed brush and weeds from the fence line, launch site, and berms surrounding the missile barns. Attending volunteers also enjoyed taking part in a guided tour of the Nike Missile Site.

﻿“Parks are fun and affordable destinations and great places to engage in healthy, outdoor activities, whether for a few hours or a few days,” said former Secretary of the Interior Ken Salazar.

If you are interested in joining Everglades National Park’s Volunteers-in-Parks program for a few hours or a few days, please contact us at 305-242-7752 or visit the Current Opportunities tab above.
Posted by Unknown at 10:00 AM No comments:

﻿ ﻿﻿﻿﻿ ﻿﻿﻿﻿Anita Dallar chose to participate in the Artist-in- Residence-in-Everglades (AIRIE) program because she has a deep appreciation for Florida's vanishing natural landscape and wildlife. Ms. Dallar returns to the AIRIE program  this month.

“All of this creative work is based on my beliefs of respecting and coexisting with Florida's natural beauty,” explains Ms. Dallar.

Anita Dallar continues to collaborate with Florida public schools and Florida non-profit children’s organizations to teach art projects based on her experiences in Everglades National Park and as an AIRIE Fellow. Ms. Dallar is a resident of Crystal River, FL, and is a visual artist and Florida State Certified Art and ESE educator.

Posted by Unknown at 3:55 PM No comments:

Student with Honors, Volunteers a Hand, then Paints a Wall

Solangel Rodriguez is an honors student at Florida International University (FIU).  Last year, she was enrolled in Dr. Peter Machonis’ and Dr. Devon Graham’s seminar class “The Everglades: From Beginning to End?” This course places students deep into the Everglades – physically, mentally, and emotionally.  Students read Everglades inspired literature, participate in Ranger programs, and become stewards through a volunteer experience.﻿﻿﻿
﻿
Ms. Rodriguez, instead of just being involved in the class scheduled volunteer service, decided to volunteer on her own.  She joined two park sponsored public events to clean up the Nike Missile Site, enhancing her connection with the park beyond the class’ syllabus.

Ms. Rodriguez also organized a guided trip into the Everglades to further her understanding and appreciation of the park through the eyes and experience of a former long-term volunteer, Anna Scharnagl.
From her volunteer experiences, the classroom lectures and coursework, and the field trips associated with her FIU honors class, Solangel Rodriguez has been inspired to artistically present her connection to the park by painting a large mural on a temporary wall inside the Green Library at FIU’s Modique Modesto campus.  The completed mural is 8' by 30' and depicts scenery such as cypress trees, sawgrass, and shorelines.

Let the Everglades inspire you, too! Become involved on a regular basis or join us on one of our scheduled volunteer events.
Posted by Unknown at 12:32 PM No comments:

For the past few weeks AIRIE Fellow Alice Raymond has been working on an experimental mapping project, experiencing visitors' perspectives on the Everglades National Park. In this artist talk she'll share reflections on this project and her time at AIRIE.﻿
﻿Alice has been busy meeting rangers, scientists, and friends exploring the park with them to get their perspective. With a focus on human actions made through the park, she aims to get a global or outside sense of the use of the park, using her own view to put in balance others' perspectives. Alice is interested in questioning the sense of wildness and landscape, looking at its evolution through decades and projects, pointing out the permanent changes. She uses the vocabulary of maps as an example of the distortion between reality, perception and representation.

AIRIE, managed by the Volunteers-in-Parks program and supported by AIRIE, Inc., a 501©3 not-for-profit organization, offers artists the opportunity to live and work in this unique environment for a month at a time. Artists interact with Park visitors by providing exhibitions, workshops, and lectures. After the residency Artists donate a piece of art, representative of their style. It is hoped that the work will characterize the Everglades for present and future generations, giving park visitors and the general public an opportunity to see our heritage through the eyes and ears of contributing artists.